“This Is How Much,” published Summer 2018, Alpinist Magazine, Issue 62

“Afternoon with an American Dipper.” July 2017, In The Air, Montana Woman Magazine.

“All About The Western Meadowlark,” aired on Montana Public Radio on May 22, 2016 on the Montana Natural History Center Field Notes segment.

Here are the links to some of my favorite blog posts I wrote while I was interning with PA Audubon in Erie, Pennsylvania.

Smith, L. ed. RTC:Rural, 2017.  Advocacy Skill Building Toolkit.  A toolkit for Centers for Independent Living and others to conduct workshops that use improv to introduce and develop advocacy skills in youth with disabilities.

For my second year of graduate school at The University of Montana, I was one of the co-editors of Camas: The Nature of the West, a literary magazine produced by the Environmental Studies graduate students at UM. Along with the fantastic Chandra Brown, my co-editor/conspirator/roommate, we produced two issues: Winter 2015 and Summer 2016. 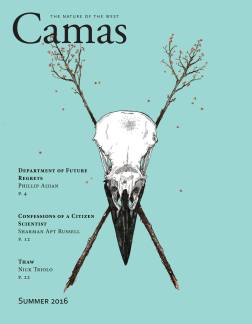