A few weekends ago I hiked up Sheep Mountain, more commonly known as Sleeping Indian. I’ve never heard anyone call it Sheep Mountain, actually. According to Wikipedia, Sleeping Indian is 11, 239 feet above sea level, and is located in the state of Wyoming. It is in the Gros Ventre Range, which is in the Bridger-Teton National Forest, which is the 3rd largest national forest outside of Alaska, which I think is cool.

Joining me on this adventure were Tess, my co-bander and roommate, her two friends, and the two dogs I was watching for the weekend, Arcas and Layla. Arcas is the little black dog, Layla the bigger one.

This is actually on the hike back down, but like I said I didn’t take many pictures on the way up. Check out the Tetons in the distance.

I didn’t take very many pictures on the way up, mostly because I was occupied with breathing and keeping my legs moving in an upward-hiking motion. It was very hard to convince my legs to do this, especially because the day before was Friday, July 4th, and we had to get up early to band, and then I stayed up late to watch fireworks and celebrate with friends. Being awake from 4 a.m. to 1 a.m. is not recommended if you’re planning on hiking up a mountain the next day. But I don’t always make the best life choices. Although, since my “bad” life choices usually involve not getting enough sleep, drinking way too much coffee, and climbing large rocks, I don’t think I’m doing too bad. And I get some sweet pictures out of it, which is really why we do these things, for the photo opportunities. I mean, if you don’t have a selfie at the top, what’s the point of even going up there?

Arcas taking in the view from the top of Sleeping Indian.

If you want 360° views of mountains, I recommend this hike. From the top, we could mountains in every direction: the Tetons, the Gros Ventres, the Winds. It was fantastic. 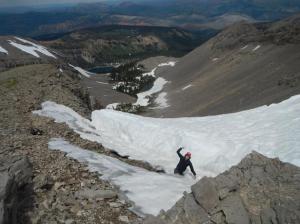 Tess, after rescuing her hat from the snowfield. She then decided to throw snowballs at us, and I decided to take pictures.

Layla eyeing the snowfield below. Luckily, we were able to convince her that staying safely on the top with us was a better idea than jumping off the side of the mountain.

We hiked up from the Flat Creek Trailhead, which is located in the National Elk Refuge. Going that way, the trail was only about 7 miles, one way, with about 4,200 feet of elevation gain. No big deal.

View from the top of Sleeping Indian.

More of the view from the top.

I was so excited to be at the top I couldn’t keep my eyes open.

On the way back down to the car.

It was a good day. We got to hike a mountain, and go for a car ride. What more could you possibly want on a beautiful summer day?

One thought on “Hiking Up Sleeping Indian”